Chairs With the Power to Transform

We often take chairs for granted. They have legs, a seat, a back and maybe arms and upholstery. Found in every home, they bring us together for meals and conversation, but they usually don’t motivate us.

The Chairs of Inclusion, commissioned and created to celebrate the 10th anniversary of the Wae Center, are something altogether different. These objects of art are inspiring people to change their perceptions about what individuals with disabilities can accomplish.

Located in West Orange, the Wae Center is an expressive arts learning center for people with disabilities. Operating as a program of Jewish Service for the Developmentally Disabled of MetroWest, Inc. (JSDD), a partner agency of Jewish Federation of Greater MetroWest NJ, the Wae Center offers artistic, wellness and enrichment opportunities to adults of varying abilities in an atmosphere that supports and inspires creativity and fosters unconditional acceptance and respect between participants and facilitators.

To create the life-size chairs, professional artists brought their concepts and materials to the Wae Center and then worked alongside the Center’s artists. Creating these bright, beautiful chairs was as transformative for the lead artists as it was for the Center’s artists. 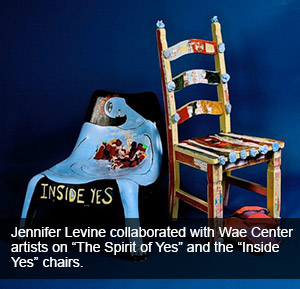 Jennifer Levine, whose recent work includes giant murals for the pre-k, elementary, and middle schools in Montclair, was one of the project’s contributing artists. She worked with several Center artists each day for a week. Together they created two chairs, “The Spirit of Yes” and “Inside Yes,” which capture the beautiful, vital spirit she experienced at the Wae Center. Jennifer noted, “The Center artists were very nurturing and had a gentle openness to trying things. I loved that I could be there to see what could be next. It was a powerful, joyous experience for me.”

She added, “The chairs were a real collaboration, with lots of different hands and perspectives. Several of the Center’s members are nonverbal, but we could work together on making art.”

“Watching the art evolve was beautiful. It was impossible not to be inspired,” says Steve Rogers, producer and director of the PBS series Driving Jersey, who filmed the artists working together. “The environment at the Wae Center is, ‘let’s try it and see if it can happen.’ What I saw with Chairs of Inclusion was that people of all abilities are capable of things we typically don’t really expect.” 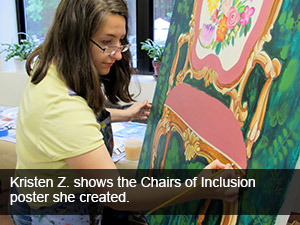 Chairs of Inclusion exemplifies the Wae Center’s belief that every person is entitled to a seat at the table, both in family life and in the wider community. For Kristen Z., who has been a Center artist for three years, the project gave her the space to be herself yet contribute to something bigger as she collaborated on several of the chairs.

“Sometimes it’s hard knowing you have a disability that people don’t see. It was really special to work on the chairs and know you’re wanted and that you make a difference to a project,” she said.

Being at the Wae Center and working with professional artists has helped her to build her confidence. “I now know I can go out into the world and know I’m included. I know I can do things on my own and the Wae Center has my back.”

Steve bonded with the Center artists in a lasting way. “I show up at Wae and it’s like I’m coming home. I walk in and it’s like ‘Hey Steve!’ and I get fist bumps. I’ve shared some of my music CDs with one of the Center members who loves music like I do. We’re friends now.” 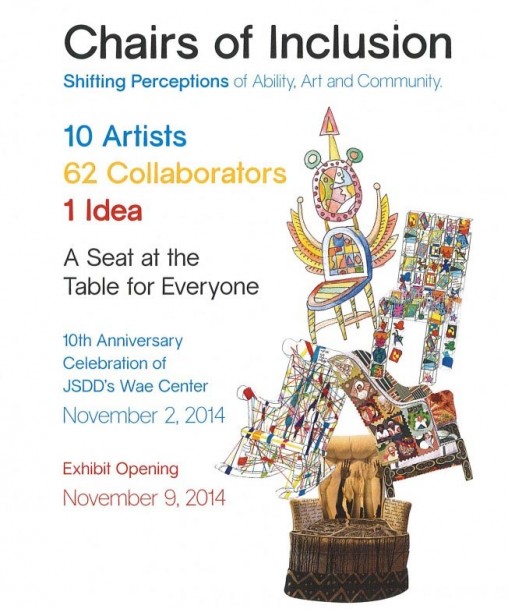 More venues to be announced