The Midrash says that big things are happening during the High Holidays.

It was around this time in 1987 when I was given a once-in-a-lifetime professional and personal opportunity. It also happened to be around my 30th birthday – and one way or another my other two previous big birthdays were also turning points: 1977 was Israel’s political turnover and 1967 was the Six Days War. You see the trend?

So in October 1987 I was ready for something big. It came as an offer to join forces with Rabbi Uri Regev in establishing the Israel Religious Action Center (IRAC). It was a brand-new concept. We started from zero. We were both very young but Regev was already a known figure in terms of understanding the complex relations between religion and state in Israel. I learned a lot from him and mainly helped keep his desk clean.

IRAC’s vision statement, crafted back then, remains relevant still: “The Israel Religious Action Center strives for freedom of religion and conscience, human equality, social justice, religious tolerance and individual rights.” The years Regev and I spent together were formative in so many ways. We became friends. We accomplished a lot and we positioned IRAC as one of the leading advocacy organizations in Israel. 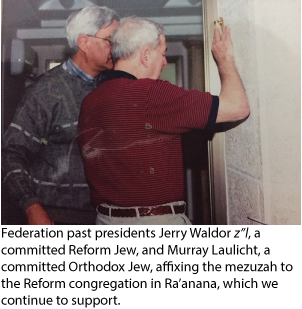 Fast forward to 1997. A decade has passed. My 40th birthday was coming and guess what… it was time for another turning point. I was already the shaliach (israeli emissary) at Jewish Federation of MetroWest and Uri came to speak at Temple Emanuel of Livingston, my New Jersey congregation, for the High Holidays. It was during yet another crisis of “who is a Jew.” During the weeks and months thereafter I learned the meaning of the American phrase “turning lemons into lemonade” – this sermon was the trigger for the establishment of the Religious Pluralism committee of MetroWest and for making our Federation a leading force in helping create a more pluralistic Israel. Two outstanding community leaders helped make it happen: Murray Laulicht, then president of our Federation and a proud Orthodox Jew, and Rabbi Eric Yoffie, a national leader of the Reform Movement.

For the sake of brevity, I’m jumping over my next big birthday of 2007, although I obviously have great stories about that year as well.

A decade later, it’s 2017. A new and even deeper religious pluralism crisis is taking place over the elimination of the Kotel compromise and another unaccepted conversion bill. I’m about to turn 60 and I’m waiting for something big to happen. The signals kept coming. During the summer, Kedma co-chair Lisa Lisser and I met with Anat Hoffman. She is now the head of IRAC and the chair of the Women of the Wall. She was one of my first hires at IRAC back in the day. Then I went with my colleague Michal Zur to visit Rashut Harabim, our religious pluralism flagship program for this year. Surprisingly I found myself in the very same offices where Rabbi Regev and I operated IRAC three decades ago. I had trouble concentrating on the meeting, and when I had the chance I went from room to room recalling the scenes of the past, including the same overloaded desk of Rabbi Regev, which is now old but quite neat.

But the real big thing came last week. Just before the High Holidays and my big birthday, Rabbi Uri Regev, now the head of yet another leading advocacy organization – Hiddush – created an historic vision document. It is a declaration he crafted with an Orthodox colleague, Rabbi Marc Angel. In it they attempt to settle the main religious and state conflicts and keep the character of Israel as a Jewish and democratic state. It was initially signed by some 50 leading rabbis and Jewish community leaders from all streams of Judaism. You can read it in its entirely here.

Our Federation was honored and privileged to be the only Federation asked to sign on and sponsor the declaration’s distribution in Israel. Just before the High Holidays our board of trustees overwhelmingly approved it, allocated special grant money to it over and above our regular allocations, and reassured the positioning of our community as a leading force in this regard. And two of the signers are Rabbi Eric Yoffie and Murray Laulicht. One couldn't wish for a better big birthday gift.