I often describe my profession as bridge engineer. I am building Living Bridges between people and communities who are separated geographically and culturally. When the “bridge” is built and the people start to walk on it, magic happens. I don’t have to do much more. The personal encounters bring human beings together, the commonalities shine and the dividing elements become secondary. I have experienced many such moments and they are always inspiring.

What I am going to share with you now, however, was one of the most meaningful and emotional happenings of my career. The most imaginative script writer couldn’t plan such a scene. It was a powerful encounter that crystallized the complexity of Israeli society and represents a microcosm of how to combat the Middle East conflict.

This story is about a new “bridge” that we have created called Achi Israeli, run by the Hinam Center and supported by our Jewish Community Foundation. It goes in line with one of our highest Global Connections priorities right now, Kedma (promoting cohesive and shared society in Israel). The concept of Achi Israeli is very simple and yet so challenging: A group of young adults, coming from the various ethnic and religious affiliations of Israeli society, will live together for a month, each week in a different community that represents a different sector. By doing so they will develop their own cohesiveness and will influence the host communities accordingly. The locations we chose are communities with which we have long-time relationships.

So, last Tuesday, I drove with our partners all the way to Horfesh, a Druze village near the Lebanese border, in order to meet and greet our first Achi Israeli cohort as they begin their month-long journey. 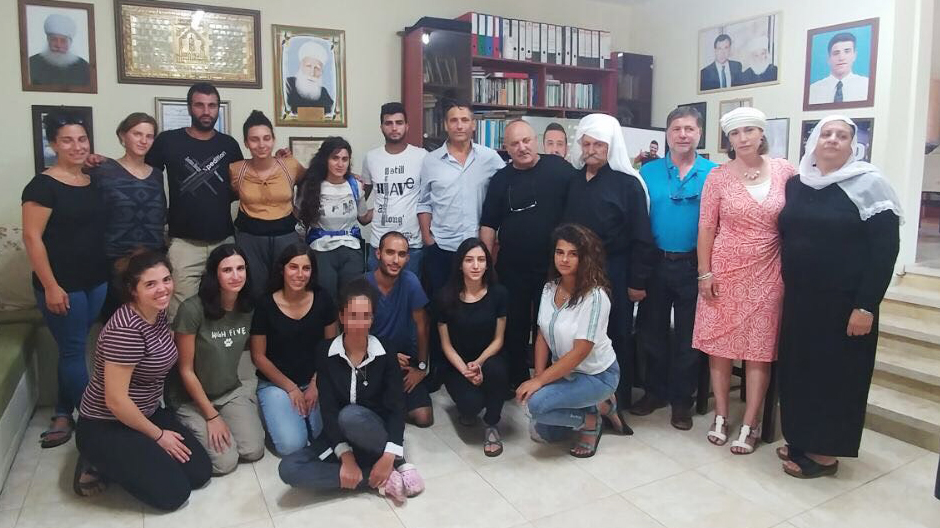 We are a bit late. As we enter the living room of a private home, we notice that the walls are covered with pictures of serious white-bearded Druze Sheks and among them photos of a handsome, smiling young police officer. We watch the Achi Israeli group, sitting in a circle, tears in their eyes, listening silently. In the center, talking to them in a very soft tone, mesmerizing everyone, is Shakib Shanan, father of Kamil, the Druze police officer who was killed a couple of weeks ago on the Temple Mount.

Shakib spoke about the caring, loving, and kind values of his son Kamil. About the special personal help he provided to older Muslims worshippers while serving on the mountain. Some of them came all the way to Horfesh to share these stories with the mourning family. He mentioned that about a thousand visitors from all religions and all backgrounds came to comfort them – including our own Greater MetroWest leadership.

He then spoke about his own long-time belief in peace, dialogue, and shared existence. How he and his wife Magda educated their children to these values. How the killers who shot his son are not shahids (martyrs), only despised murderers, but Kamil is the martyr.

“I want you to go out of here with smiles on your faces,” he concluded. “I have many Muslim and Jewish friends. We can live together here on this common land of ours. I pray that Kamil’s death will pave the way for shared living.”

When we selected the Achi Israeli participants only weeks before the Temple Mount shooting, we couldn’t have imagined such an unbelievable scenario: In our group of ten there are two young ladies: one is Raya Shanan from Horfesh, younger sister of Kamil, and the other is M from Um El Fahem, the nearby Israeli-Arab town from where Kamil’s murderers came.

Now imagine the scene: Both women are sitting in the same room, crying together, hugging with the rest of the group and with Kamil’s parents, listening to Shakib’s inspiring words. How courageous is it for these young people to cross the barriers of anger, hate, and fear? How symbolic is it that we were all there on this living bridge, in that living room, sharing in our grief, wisdom, and comfort?

As we left the Shanan’s home we told Shakib of our decision to name the program in Kamil’s memory. He was very appreciative and told us that he will be our ambassador and will travel to all corners of the world, if needed, to share the story of his son and the hope for shared society in Israel.

Drishat Shalom (now more than ever)