“Because I just got a call from Avrum asking me what will convince MetroWest to partner with Ofakim, and I advised him to start with a personal plea from Peres to you.”

It was just months after Yitzchak Rabin’s assassination. Shimon Peres was the Prime Minister and Avraham Burg was the head of the Jewish Agency. The city of Ofakim was in deep economic and social trouble and was looking for a partnership with a Diaspora community. Peres asked Burg which community was available and capable of taking on such a huge task. His answer was “Only MetroWest.” This is a true story, and his was an accurate answer.

A few weeks later, a task force of lay leaders and professionals from New Jersey went to Ofakim/Merchavim to explore the possible partnership. If there were a few hesitations during the first day of the visit, they disappeared when we experienced, together with the residents of the region and the entire Israeli society, one of the most tragic and horrifying weeks – the week of Purim 1996. While driving in the Negev, we witnessed three deadly terror attacks that took the lives of almost 50 Israelis and wounded hundreds. Some of the casualties, mainly children, were murdered while wearing their Purim costumes. The scenes from this visit cannot be erased from memory.

Of course we accepted Peres’s plea and have since developed a wonderful partnership between our communities. From time to time, when meeting with us, Peres would recall the story with pride. He had succeeded in strengthening Israel/Diaspora relationships while at the same time helping the Negev, two of the life-long passions. 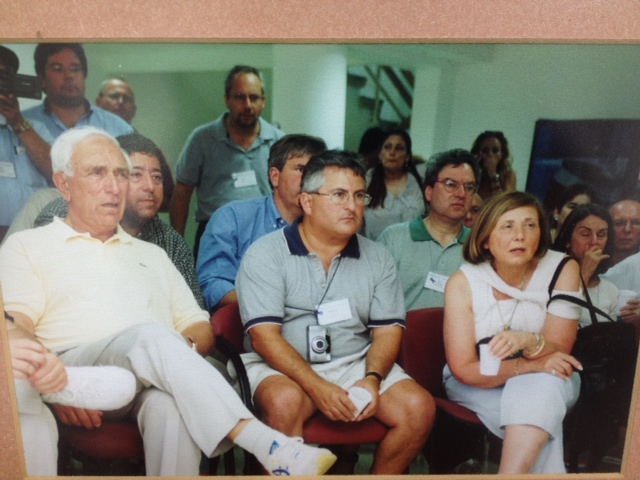 While over the years we’ve created many memories through our living bridge the next formative event took place 15 years ago, on September 11, 2001. Two busloads of MetroWest community members, including several senior public officials, on an Israel mission were in Ofakim when we heard the news from New York and Washington, D.C. It was on their community center television that we watched the horrors of that day unfold. The planned celebration that evening in Merchavim was transformed into an emotional memorial ceremony and an impressive demonstration of unity. (Symbolically, this year 52 American police officers visited this same community center and commemorate 9/11 with their Israeli peers.) Senator Frank Lautenberg z"l was with us on that mission. As a senior member of the U.S. Senate, he needed to be better informed. While waiting for a taxi to take him to Jerusalem, he reached out to his friend and then the Minister of Foreign Affairs, Shimon Peres. I can only imagine the look on Peres’ face when he got that call from Lautenberg on 9/11 from the Matnas in Ofakim!

In 2006, on the occasion of the 10th anniversary of our partnership with Ofakim, we decided to screen a video message from Shimon Peres at Federation’s annual meeting. I went to videotape him at his office in Tel Aviv. He was then the cabinet minister for the development of the Negev and the Galilee – not a high level position, but the visionary Peres was not disheartened. He invented the phrase: “The man is shaping the position and not the opposite.” He spent almost a half an hour chatting with me that day. I told him about the developments in our partnership since that historic phone call to Max ten years before and about the challenges and frustrations that we were facing.

Towards the end of this unexpected conversation, he said something to me that I still carry with me to this day. I quote from memory: “Whatever happens, don’t lose hope and patience. Don’t change direction or location. What you are doing in Ofakim is no less than fulfilling Ben Gurion’s Zionist dream.”
Shimon Peres is the ultimate optimist. One of his most popular mantras goes like this: “The optimist and the pessimist will leave this world the same way. The difference between them is the way they live their lives. So I decided to always be optimistic as long as I live.” Now that he is fighting for his life, one can clearly see it.

September 28: All of us in the Greater MetroWest communities in Israel and New Jersey mourn the loss of this great man. May his memory be a blessing.